If one of the conditions is not necessary or not possible you should use an other migration scenario, for example a cross-forest migration which can be used to build a new AD parallel to the old AD. This last option is a bit more work then installing an Exchange 2007 server in the current environment.

Before we start you should check a few things:

These to points can be found out very easy:

An easy tool to check these things is the Exchange Best Practice Analyzer, this tool has an option that can check you existing Exchange environment for Exchange 2007 readiness.

After we did the checks on the Exchange 2003 site we can install Exchange 2007 on a server. Before we start the install ensure that the following components are installed on it:

When you installed all pre-requisites we can start with installing Exchange 2007. If you have Exchange admin privileges but you can’t create objects in AD because of the rights you have. Ask an administrator who has enough rights to execute the following commands:

I will skip the first three steps because you can choose what you want for those. You can for example end logs to Microsoft if it crashes.

We start with the part where we need to choose which components we like to install. 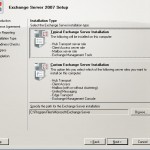 When you made a choice press the next button 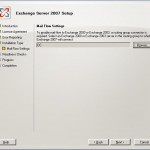 When you have selected the server press next

The setup will check if all pre-requisites are met. If there is something wrong/not installed it will give you a warning. When all problems are solved you can continue with the Exchange installation, press next 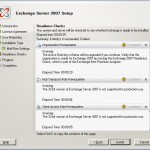 When you start the System Manager from Exchange 2003 and have a look at the connectors you will see the routing group connectorwhich is made during the setup. When you try to modify it you will receive a warning that it can be modified from a Exchange 8.0.30535.0 manager.

Moving users from the old server to the new server is not an issue. The only disadvantage of it is that you can’t do it via the GUI, you will have to do it via Powershellmove-mailbox -TargetDatabase “Ex2007 Server\First Storage Group\Mailbox Database -identity UserName

It’s no issue to move mailboxes between Exchange 2003 and Exchange 2007 there is only one remark. Exchange 2007 has an other way of working with “rules” which are created by the clients. The parameter IgnoreRuleLimitErrors can be added to the command to prevent migrating the rules the user created in Outlook, this is only neede when moving a mailbox from Exchange 2007 to Exchange 2000/2003.

This was another tutorial on Exchange 2003, the next tutorial will probably be how to remove the Exchange 2003 server from the environment.